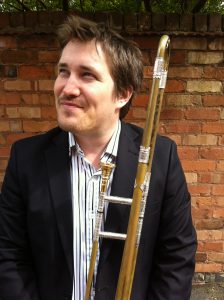 Martyn is a versatile trombonist based in Birmingham. He gained a First Class Hons degree at the Birmingham Conservatoire where he won the Conservatoire’s Brass Prize and the Corton Hyde Early Music Prize. He then went on to study the Sackbut at Post-Graduate level with the generous help of the Musician’s Benevolent Fund’s prestigious Ian Fleming award and the Boise Foundation.

Martyn is an early music specialist, performing regularly with such groups as Sir John Eliot Gardiner’s Monteverdi Choir and English Baroque Soloists (with whom he has extensively toured the US and Europe), Orchestre Revolutionnaire et Romantique, The Gabrieli Consort and Players, His Majesty’s Sagbutts and Cornetts, Orchestra of the Eighteenth Century and The Orchestra of the Age of Enlightenment – taking him on a European tour with Sir Simon Rattle and an appearance at the BBC Proms with Marin Alsop.

As a modern trombonist he has performed with The Royal Shakespeare Company, The City of Birmingham Symphony Orchestra, The Birmingham Contemporary Music Group and The Orchestra of the Swan. He is a member of Jack McNeill’s Propellor ensemble (a cross-genre based project and artist in residence at Snape Maltings Open Space 2016-18) and Ed Bennett’s DECIBEL (a fully amplified contemporary music ensemble).

Martyn has recorded discs with His Majesty’s Sagbutts and Cornetts, The Choir of King’s College Cambridge, Alamire, The Gabrieli Consort and Players, The Wrocław Baroque Orchestra, DECIBEL and Propellor.

As an educator Martyn teaches Trombone at University of Birmingham as well as giving orchestral coaching sessions and early music workshops. He has directed the early brass chamber music course for Lacock music courses in Spain. Martyn was the Brass chamber music tutor for Aldeburgh Youth Music during the 2017/18 season and has worked with young musicians on the BBC Ten Pieces initiative.